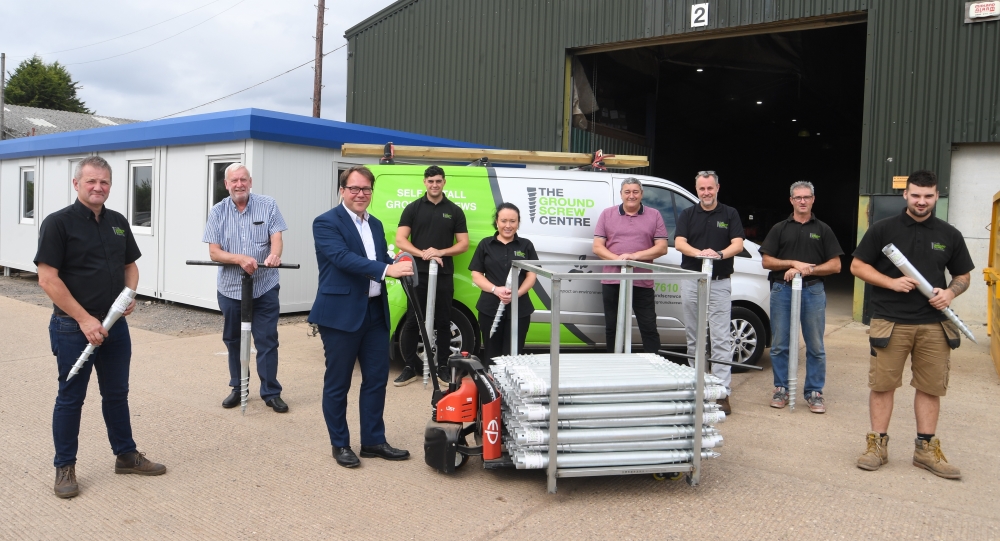 Warwickshire-based business The Ground Screw Centre has enjoyed its most profitable year after linking up with the University of Warwick Science Park’s Business Ready programme.

The company, which supplies ground screws as an alternative to concrete foundations, is now setting its sights on breaking the £1 million revenue mark in the near future.

The Ground Screw Centre was established in 2016 by directors Steve Hawthornthwaite and Paul Brown.

The company experienced significant growth thanks to its range of ground screws, brackets, and self-installation equipment over the last 12 months – matching the boom in sales for sheds, garden rooms, offices, decking and other small structures such as signage and fencing.

The screws supplied by the centre are more environmentally friendly, efficient and cost-effective than concrete foundations, and can be used as a base for garden rooms, sheds and fencing in the domestic market as they do not require expertise to install.

Aware of the huge market potential of their business, The Ground Screw Centre’s directors were looking to identify key aspects of their operations that could be improved in order to speed up its expansion.

Tim Powell – who previously ran the Science Park’s Access to Finance & Minerva business angels’ network – introduced the centre to Business Ready after he was recruited to advise on business development.

Business Ready delivers support to expanding businesses managed by the business support team at the University of Warwick Science Park and is funded by the European Regional Development Fund and Warwickshire County Council as part of the CW Business: Start, Grow & Scale Program.

Over the past year, the company has been supported by the programme to take advantage of the increased popularity of home garden DIY projects.

The company has received help with digital marketing to help it grow its customer-base but is also making use of the flexibility of support and using advisers as a sounding board for its plans for expansion.

It also utilising the connections to the University of Warwick as part of its drive to develop new product innovations.

The Warwickshire company now counts global brands such as Manchester United and McDonald’s amongst its clients, its grown from three to nine staff and moved from the Innovation Centre at Stoneleigh Park into its own base in Ryton.

Steve Hawthornthwaite said: “We have grown dramatically over the past year. As well as the market shifting, the introduction of Tim to the business, now as chairman, coupled with the support we’ve had from Business Ready, particularly being able to access skills and expertise from one of their digital marketing consultants has helped us achieve such strong growth.

“We also have business customers and that ranges from Premier League clubs such as Manchester United using our screws for ball-stopping nets through to McDonald’s using them for digital signs.”

Dirk Schafer, business adviser at the University of Warwick Science Park, said: “The beauty of the Business Ready programme is that it is not prescriptive, we find out what a business needs for its next stage of growth and we support it appropriately.

“As a result, the team at The Ground Screw Centre have been able to dip in and out of support when they’ve needed it and benefited from the link with the University of Warwick Science Park as the company explore the development of new product innovations.

“It’s a business with great potential for further growth and we are delighted to have supported them in their expansion.”