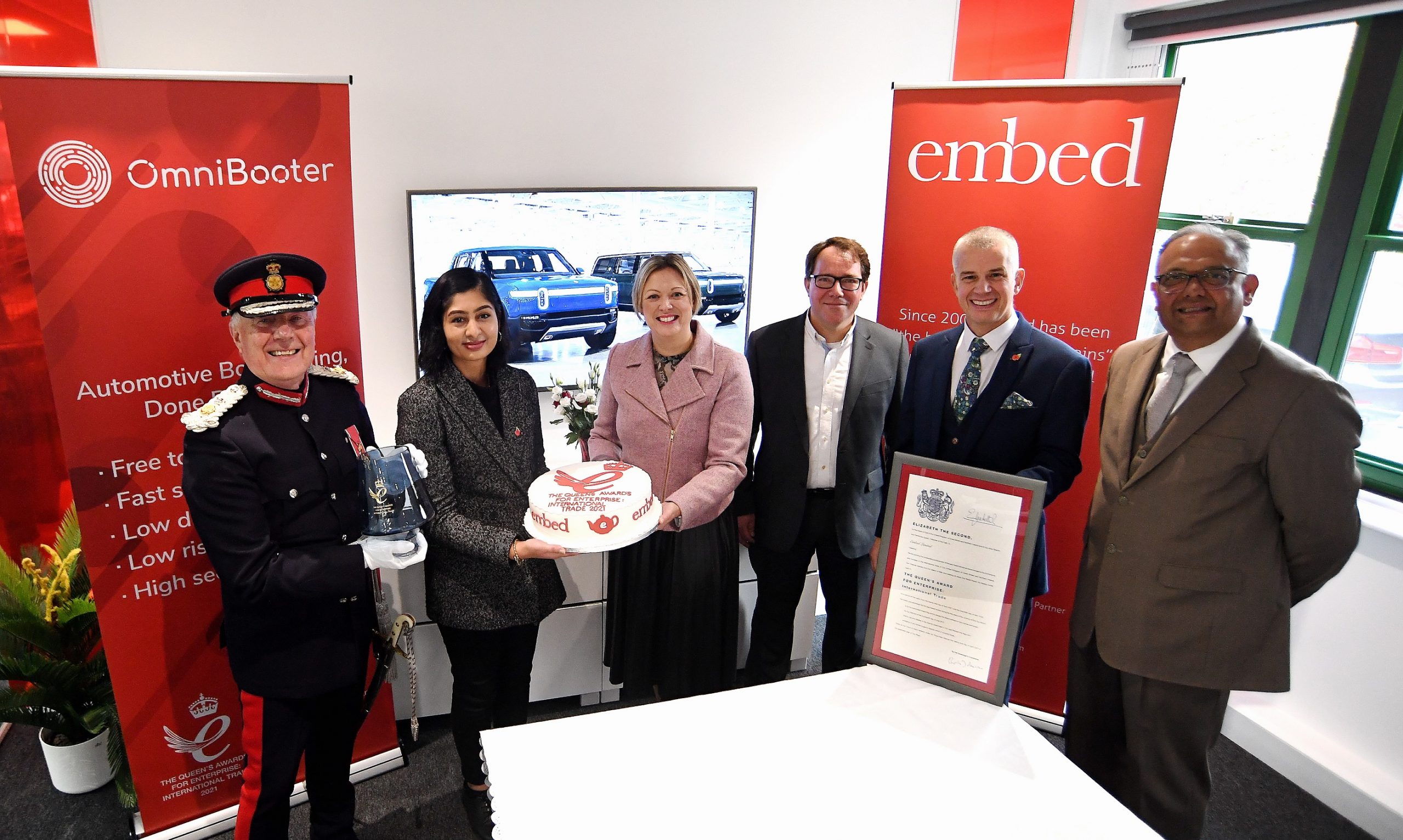 A high-tech Coventry company has been heralded as an example for others to follow after being handed the most prestigious business award in the UK.

Lord Lieutenant of the West Midlands John Crabtree OBE, Her Majesty The Queen’s representative in the region, presented the Queen’s Award for Enterprise in International Trade to Embed Limited at its offices at the University of Warwick Science Park.

The company designs original electronic components and software for a variety of automotive manufacturers – including the likes of Jaguar, Gordon Murray Automotive, and McLaren – and, more recently, for companies in the electric vehicle market such as Volta Trucks and Rivian, which is backed by Ford and Amazon.

Embed Limited learned of its Queen’s Award in April coming on the back of a staggering growth in overseas sales of 1,082 per cent with exports now making up 66 per cent of the company’s overall turnover.

Mr Crabtree said: “This really is the ultimate accolade and the evidence shows that being a Queen’s Award winner boosts sales and is a great way of helping to recruit and retain staff.”

Embed designs unique products known as ‘embedded systems’ to control a wide range of vehicle functions depending on its clients’ needs – from improving the interface of a console in a family car, right through to the development of ‘self-driving’ autonomous vehicles.

Embed either works directly with automotive manufacturers, or with firms that supply those manufacturers, and currently employs 35 people at its site in Viscount Centre on the Science Park.

The company has been supported in its growth by the Science Park from the outset when it was founded after the collapse of MG Rover.

It has also been assisted by the CWLEP Growth Hub, which helped Embed access funding for a recent office extension and has also provided support with skills and recruitment.

And its overseas trade growth has been backed by the Department of International Trade team at the Coventry and Warwickshire Chamber of Commerce.

Co-owner Ivan Wilson said: “We are proud and honoured to be handed the Queen’s Award for Enterprise. It’s been a real team effort and reflects the hard work of everyone in the business.

“We have exciting plans to grow even further and will need more people to do that, which is positive news for the local economy.

“We are also very grateful for the support we’ve had from the CWLEP and the Growth Hub, the Chamber and the Science Park, where we’ve been based since we started.”

Sarah Windrum, Chair of CWLEP, said: “Embed is a great example of our globally innovative businesses who are proud to call Coventry and Warwickshire home and whose products are in vehicles all over the world.

“I’m thrilled that they’ve received well-deserved recognition with the Queen’s Award and that the team at the Growth Hub has been able to support the company’s growth.”

Ajay Desai, International Trade Director at the Chamber – who encouraged the company to enter the Queen’s Awards, said: “Overseas trade is crucial to the economy of Coventry and Warwickshire and Embed has shown what can be achieved. They are very deserving winners.”

Dirk Schafer, business adviser at the University of Warwick Science Park, said: “Embed has been with us since the company began in 2005 as a start-up and it has been great to support the company all the way through to being a Queen’s Award winner.”

Zarah Sultana, Labour MP for Coventry South, said: “Locally-rooted businesses are at the heart of our economy and Embed is leading the way in their field, developing cutting-edge technology for the electric vehicles of the future. I was thrilled to join this Coventry-company to celebrate them winning the prestigious Queen’s Award for Enterprise.”